Officer Laurich rescued a puppy two months ago who had drugs in his system in what was one of the most heartbreaking cases of abuse they’d ever seen. The poor dog was found in a California motel room during a drug bust. The moment Bubba recognizes the officer here is so special. 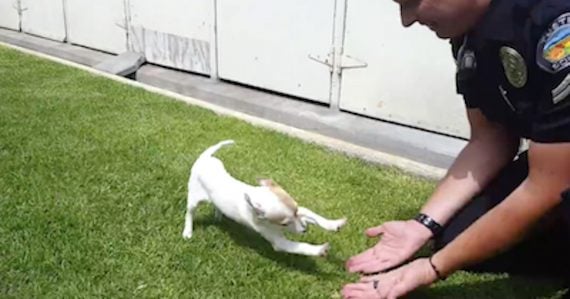 “We have received many requests asking about Bubba who was taken into custody in March due to drugs in his system. Today we visited Orange County Animal Care and reunited Bubba with Officer Laurich. Officer Laurich is the original officer who took Bubba into custody. Bubba looked very healthy and happy and both he and Officer Laurich seemed to thoroughly enjoy their time together.” – Tustin Police Department

Bubba didn’t forget his hero from that day. It’s so special that they got to spend this time together before the pup moved onto his brand new, loving life!